Is there any evidence for conservative treatment of chronic exertional compartment syndrome?

In the Clinic of Sports Medicine at Bispebjerg and Frederiksberg Hospitals we treat patients with chronic exertional compartment syndrome referred to us by the doctors. In the rehabilitation we focus on strength training, stretching exercises and alignment correction of the lower extremity. We experience inconsistent results in the treatment of these patients with many not being able to return to previous activity level. Therefore we find it relevant to examine the literature on this matter to identify the most effective conservative treatment regime for this group of patients.

Several factors contribute to an increase in intra compartmental pressure. For instance in-elastic fascial sheath, increased volume of muscle with exertion due to blood flow and edema, muscle hypertrophy as a response to exercise and dynamic contraction factors due to the gait cycle (2).

Is there any evidence for conservative treatment of chronic exertional compartment syndrome?

Articles that were solely concerning surgery and surgical techniques.

We searched PubMed, PEDro, Embase.
Of the 184 articles found, 56 were selected based on title. 19 of these were duplicates. We read the abstracts of the remaining 37 and included 11 based on the inclusion criteria. One article was not possible to find in its full form and was excluded. 10 articles were ultimately included for this CAT. After thoroughly reading these articles, we decided to critically evaluate 2, since these were the only intervention studies that exist. 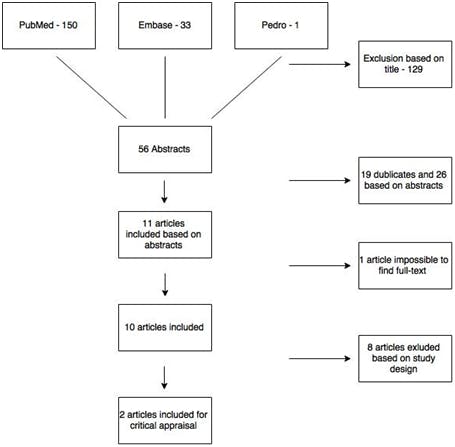 The two subjects were instructed in forefoot running techniques 3 times a week, over a period of 6 weeks, and slowly increased their running distance in the course of these 6 weeks.
After 6 weeks of training the female subject was capable of running a distance of 5 km with no pain. The male subject ran 4 km, and then complained of pain to the left foot arch, why the test was stopped.
A 7 month follow-up questionnaire showed significant improvement of running distance in both subjects, with the female being able to run up to 12.9 km, and the male subject running 6,5 km.

Critical evaluation:
A case study has a very low evidence-level, but can be used to generate hypotheses  regarding a given disease or treatment procedure. The authors have used this case-study as a pilot for a slightly bigger clinical trial. The training-intervention in this study though is very well-described and therefore easy to reproduce. Overall the article scores as poor evidence.

Diebal A. R. et al. 2012:
Clinical trial with 10 subjects. All of the subjects had been diagnosed with CECS by an orthopedic surgeon, and were indicated for surgical intervention (fasciotomy)
All patients were military personnel required to pass the biannual Army Physical Fitness Test.
Pre- and post-intervention measurements included compartment pressures, kinematic and kinetic measurement and running performance, and self-report questionnaires.

The intervention was the same as in the case study: The patients participated in a 6-week forefoot strike running instruction 3 times/week. The focus in these exercises were to increase step-rate and activate hamstring muscles in knee-flexion instead of the triceps surae pushing the foot of the ground.

Running distance increased over 300 %, and the post-running intra compartmental pressure was significantly less after 6 week. All subjects avoided surgical intervention.

Critical evaluation:
The small sample size in this project (only 10 subjects) minimizes the generalizability. Furthermore there is no control group, which we consider to be an important methodological flaw in this study design.
There are clear inclusion and exclusion criteria, and the intervention is well described and easy to reproduce. The statistics used in this article is relevant.
Overall the article scores as poor, because of the small sample size and lack of control group.

Although CECS is a common condition in athletes and is quite well described in the literature there is a lack of studies examining the effects of conservative treatment.
All of the clinical guidelines and reviews indicate no effect of conservative treatment, except changing activity level or sport. However, none of these refer to any specific trials supporting this statement.

The only trials found concerning CECS are the two above mentioned of poor quality and therefore cannot be considered golden standard conservative treatment. There is, however, a tendency suggesting that a change in running style can increase running distance and lower intra compartmental pressure.

In general the effect of physical therapy for patients with CECS remains to be elucidated and therefore further studies are needed on this topic.

Declaration of the authors independence