Pectoralis major tendon rupture is a rare injury first recorded in 1882 (1). The injury most commonly occurs in 20-40 years old male and have become more common because of the increasing popularity of bench pressing (1).

The pectoralis major is a powerful muscle that is responsible for abduction, flexion and internal rotation of the humerus (1). Patients often give a history of doing a maximal lift or effort and feeling a sharp tearing sensation and weakness in the affected shoulder, while the injury is often accompanied by an audible snap or pop (2).

Pectoralis major tendon repair is currently the recommended means of treatment (1). Treating this injury surgically is associated with lower incidence of strength deficiency and improved function compared to conservative treatment (3).

The conservative treatment is often recommended for less active patients who are having minimal pain or functional disability (3). This treatment consists of passive-assistive physiotherapy for three weeks followed by muscle strengthening exercises for several months (4).

In the clinical setting physiotherapeutic interventions are often used to store physical function and reduce pain after pectoralis major tendon repair, but the scientific background for the intervention are not clear. The purpose of this CAT is to systematically search and appraise the literature in order to elucidate the scientific background for applying physiotherapeutic intervention in the rehabilitation of patients with pectoralis major repair.

Is there any evidence for rehabilitation following a pectoralis major tendon repair?

All articles on all levels of evidence involving rehabilitation after a pectoralis major tendon repair were included. The articles had to be written in English.

Articles that solely were concerning surgery and surgical techniques

The terms in the patient and intervention category were combined with OR and afterward combined with AND. Medline, PEDro, Embase and Cochrane were searched and most recent search was dated March 20th 2020. Cinahl was out of order at that time. 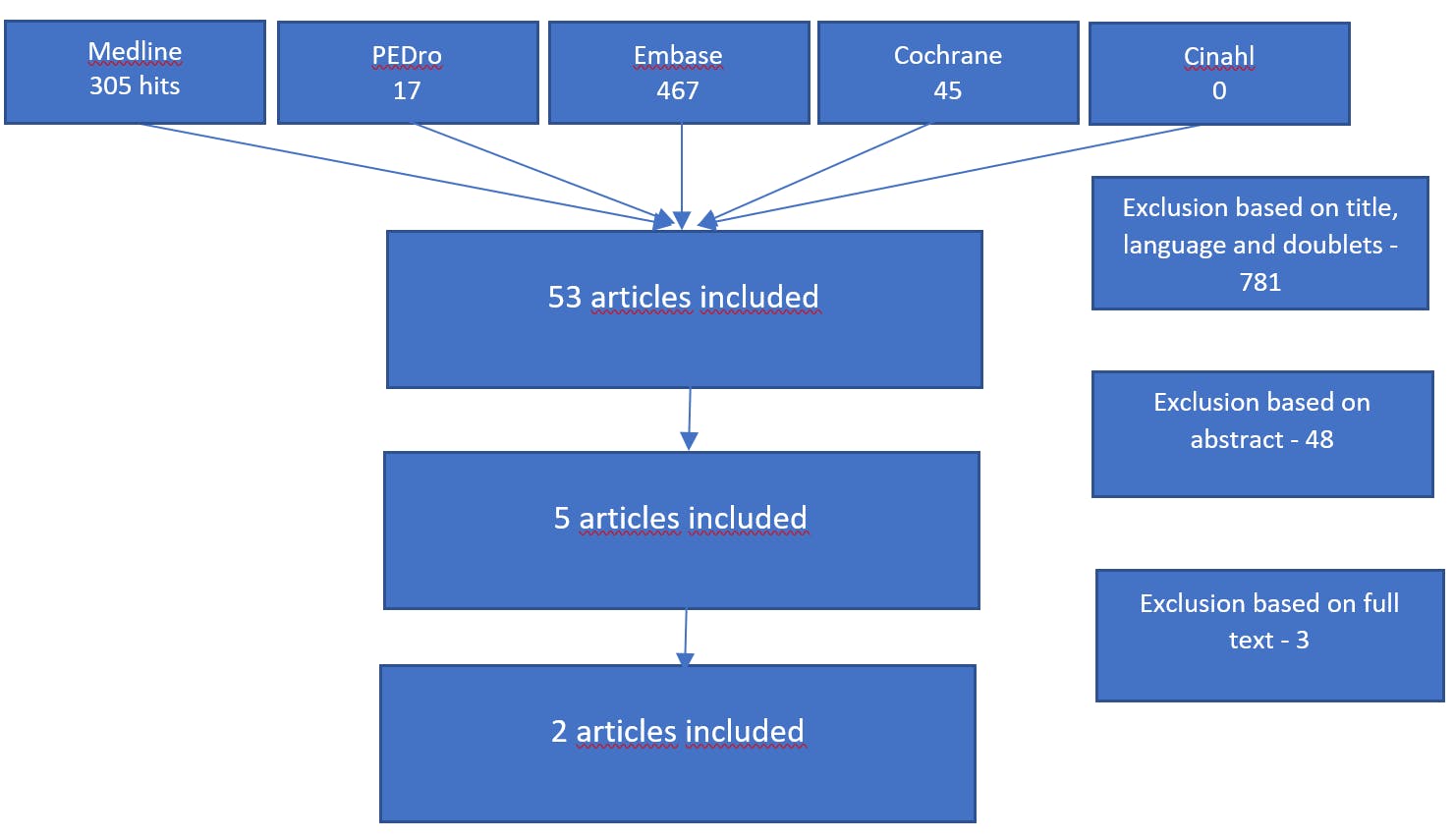 No systematic reviews, randomized controlled trials or interventional studies investigating the purpose of this CAT were found, which led to two case reports were evaluated. There is no official checklist for case reports, but the CAse REport (CARE) guidelines (5) describe systematically reporting guidelines for case reports.

Case report with one subject, a 30-year-old male with pain in his left shoulder after a fall while snowboarding. An MRI scan showed a complete rupture a few millimeters from the insertion on the humerus. The patient was treated surgically and afterward followed the rehabilitation protocol for Case 1 (Figure 3). The rehabilitation protocol lasted 16 weeks and had a gradually progression.

After the 16 weeks of rehabilitation, the patient gained full range of motion and was able to return to and participate in competitive contact sports.

The authors have used this case report to present a rehabilitation exercise program and to suggest a reasonable schedule of activities of daily living and participation in sports after surgical treatment of a pectoralis major tendon rupture. The exercise intervention in this report is very well-described and therefore easy to reproduce.

Case report with one subject, a 29 years old male serving in the US army in Iraq felt pain in the right shoulder after bench press. The patient was examined by a physician and referred to physiotherapy with the diagnosis: shoulder strain. The physical therapist examined the patient, who after sparring with two orthopedic surgeons got a MRI scan, that revealed a near-complete rupture. The patient was treated surgically and followed the rehabilitation protocol for Case 2 (Figure 3). The rehabilitation protocol lasted six months.

After 12 weeks the patient had full pain-free active range of motion and progressed well through the strengthening program in manner that allowed return to full duty. After six months the patient maintained resumption of full military duties and was performing a routine of strength training 3 times a week (a chest routine including dumbbell bench press with weight ranging from 11.3 to 15.9 kg and the ability to perform 50 push-ups without problems).

The authors have used this case report to highlight the management of this injury within the unique constraints of combat environment. Even though this case report is special because of the environment, it is still transmissible to other patients because of how the injury occurred. The exercise intervention in this report is very well-described and therefore easy to reproduce.

According to the CARE guidelines (5), this case report lack a timeline in form of a table or figure giving the specific dates and times of important components of the case. The timeline should help give an overview of the key events of the case unfolded. Furthermore, no patient perspective or experience was described and whether the patient has given informed consent, even though it is recommended in the CARE guidelines.

The purpose of this CAT was to investigate the evidence of physiotherapy rehabilitation following a pectoralis major tendon repair.

Even though the search resulted in 834 hits, most of the studies about pectoralis major tendon rupture investigated surgical versus conservative treatment and were often more than 10 years old.

The effect of physiotherapeutic intervention on rehabilitation after surgery for patients with pectoralis major tendon rupture remains to be elucidated and therefor interventional studies are needed on this topic.